Garmin R10 Launch Monitor Review | The good and the bad

The Garmin R10 has quickly become one of the hottest launch monitors on the market. Largely due to two things it offers that no other launch monitor under $1,500 has been able to provide up to this point. Golf simulation and club data. The R10 offers these two valuable features and costs just $599.

So it's no surprise that golfers are swooning over this unit! We've got the unit in hand and were able to do some thorough testing.

In this product review, we’ll see if the Garmin Approach R10 Launch Monitor lives up to its hype.

Here are some links in case you want to skip to specific sections: Is The Garmin R10 Accurate?
What data does the R10 provide?
The Garmin Golf App
Golf Simulation with the R10
Garmin R10 vs more Expensive Launch Monitors
How Much Space Do You Need to Use the R10?
Overall Verdict


Is The Garmin R10 Accurate?

The takeaway: The accuracy of the unit is very good but as expected from a unit in this price range, not perfect.

Reviews on the accuracy of the Garmin R10 Launch monitor tend to provide a mixed bag of opinions. Some users rave over the launch monitor claiming it's the best in the industry while others claim to be mildly disappointed. If you've already read, or watched, a few reviews on the internet and found this, then here's why. Your experience with the Garmin R10 Approach will depend on your expectations and experience with other systems.

Garmin’s self-advertised accuracy ranges are +/- 3 MPH for club speed, 1 MPH for ball speed, 1 degree for launch angle and launch direction, and 5 yards for carry distance. We've found that throughout an entire range session, this holds true. Compared to more premium launch monitors, the R10 will produce more individual misreads. But averaged out over a bucket of balls, the Garmin will undoubtedly provide data averages that you can trust.

For anyone above a 5 handicap, the Garmin provides more than enough accuracy to fine-tune your game. The R10 can be used indoors or outdoors - another great perk to the launch monitor. In our testing, we found the R10 slightly more accurate outdoors than indoors. This is very common for launch monitors that use doppler radar. Typically the more space a radar-based launch monitor has to track the ball, the better.


What data does Garmin R10 Provide?

The Takeaway: The R10 provides more data than any launch monitor under $1,000.


The Garmin launch monitor provides all the most important data metrics such as carry and total distance, ball speed & club speed, and spin rate & axis.

It's rare for a launch monitor under $5,000 to provide that level of data, let alone for a unit that costs just $599.

With the data R10 provides, you'll be able to dial in your distances, you'll be able to see your spin rate and launch angle metrics (which are the most important metrics to work on if you're looking to hit the ball further), see your shot shape, and fix errors in your swing using it's advanced club metrics like club path.

Here are all the data points you'll get with the Garmin R10. There are other launch monitors on the market that provide even more data. But it will cost you a lot more!

Summary: An easy-to-use app with many helpful data summary views. Poor graphics are the only downside to the Garmin App.

To play courses using E6 Connect you can use the free version which is only compatible on iPad and only gets you 5 courses. Or you can pay $200/yr for more courses, E6 Connect online events, as well as PC compatibility. We'll discuss the R10s simulation options in-depth later on. For now, let's discuss the Garmin R10 driving range. One of the first things you'll notice from the Garmin Driving Range is that the graphics look like something out of an old Nintendo video game. If there is some question as to "how is the R10 so cheap", then this may be part of the answer. They obviously did not put a lot of resources into the graphics.

But aside from the graphics, it gives you everything you would want. Multiple data views, shot groupings, shot tracers, and even the ability to record swing videos.

It also features an audio component that allows you to pick one data point that will be spoken to you out loud after each shot. So if you want to hear your carry distance after every shot, for example, the Garmin app will tell you without you needing to go to your phone every time.

Here are a few screenshots of the data views: Golf Simulation with the Garmin R10

Golf simulation using the R10 is definitely the best perk of this unit. The fact that you can play real courses with such an in-expensive unit is mind-blowing. You're a mat and hitting bay away from having your own at-home golf simulator!

As of now, you have two options - Home Tee Hero or E6 Connect. If you plan on using this feature frequently, then we recommend E6 Connect due to its superior graphics and gameplay. But here is the low down on both.

Home Tee Hero with The R10

You can play local courses

With home tee hero, you can possibly play your home course. Yes, the one right down your road! Home Tee Hero has over 42,000 real courses in their course library allowing you to search by location and play the courses near you.

Oftentimes low-cost launch monitors will have a 1-3 second lag time between when you hit the shot and when the data is displayed on the screen. With the R10, the shots display very quickly which makes the simulation feel more realistic.

Not bad on short shots and chips

On shots 30 yards and in, the R10 does surprisingly well!

Play with up to 4 people

You can play a round with up to 4 players. You can also set up tournaments with friends remotely if they also have the Garmin R10.

Courses look nothing like they do in real life

The graphics in Home Tee hero are, to put it bluntly, terrible. Although you can play real courses, they won't look too much like the real thing. You will get the correct distances and course layout, but don't expect much else!

The Garmin R10 cannot measure putts. When on the green, the R10 will automatically assign you a 1 putt, 2 putt, or occasionally 3 putt depending on your distance from the hole.

iOS or Android Only

Home Tee Hero is only compatible on iOS or Android, not PC or Mac. One of the biggest pros to E6 Connect over Home Tee Hero is the graphics. The play experience and course quality is miles ahead of home tee hero.

Although you can play real courses on both softwares, E6 Connect actually looks real. Playing at a well-known course such as Harbour Town will look like the real thing!

Available on PC and iOS

Although there is no Android option, the option to play with a PC is great.

Home Tee Hero will cost $99/yr while the basic version of E6 Connect will cost $300 for access to 27 courses, online events, the E6 Connect driving range, and peer-to-peer play. The expanded subscription which includes over 100 courses costs $600/yr.

The software doesn't matter. Garmin R10 does not have the capability to measure putts. 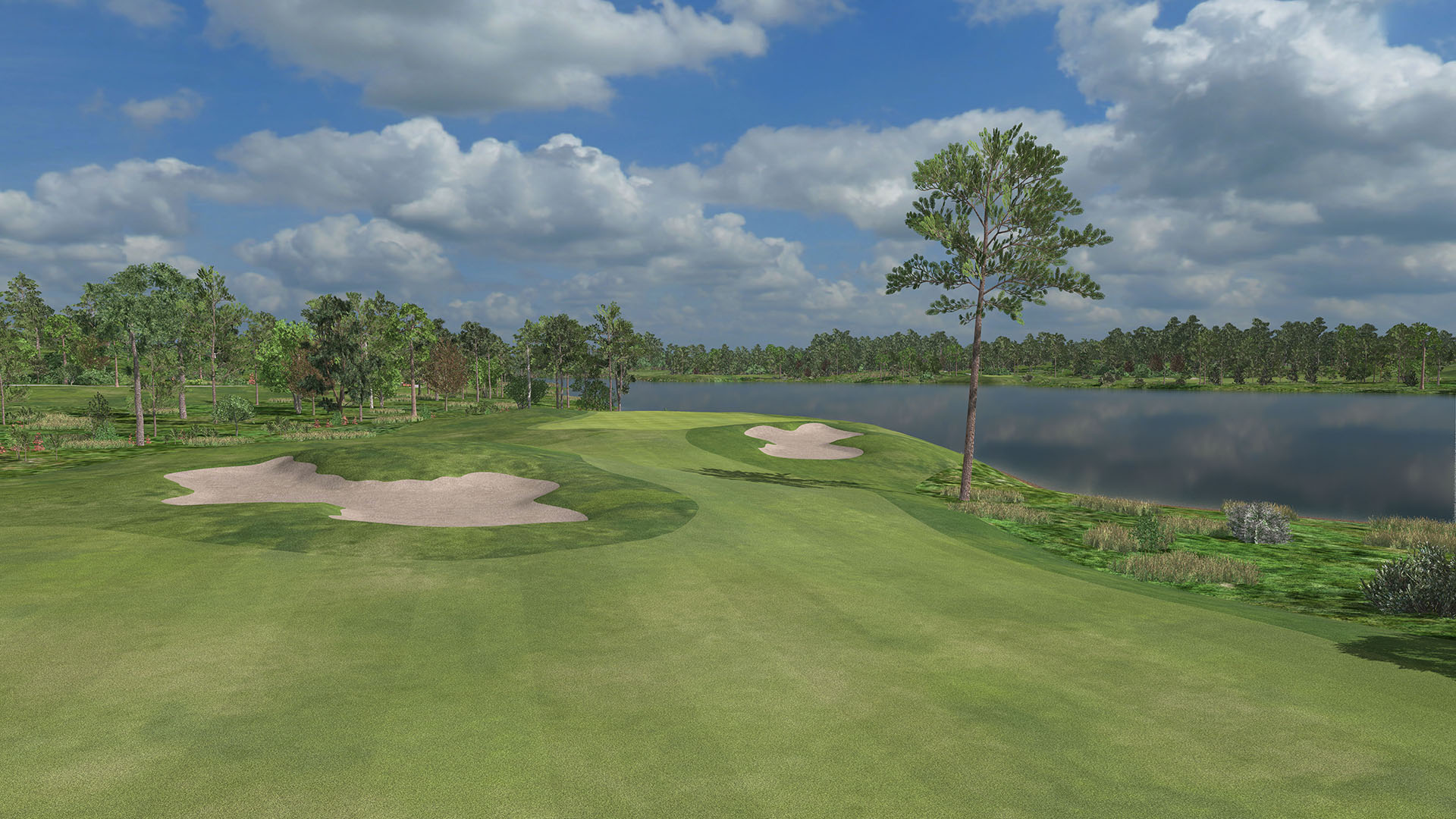 We've tested a lot of different launch monitors so we feel that we have a pretty good understanding of how they all stack up. In the under $1,000 category, the Approach R10 is the best in its class.

But here are a few things you miss out on compared to the more expensive launch monitors:

One of the biggest downsides to golf simulation on the R10 is the fact that it cannot read putts. Although, putting can be difficult on all simulators - so some people often end up setting up gimmie rules regardless.

As you step up to launch monitors like SkyTrak or Mevo+, you will also get a step up in accuracy. Don't get us wrong, the accuracy of the R10 is not bad at all! But some numbers such as spin can be less consistent on the R10

While this could change, golf simulation with the R10 is currently limited to Home Tee Hero and E6 Connect. Units like SkyTrak have a lot more integration partners. However, the good news is the E6 Connect is one of the top options out there. How Much Space Do I Need for the Garmin R10?

When reviewing indoor launch monitors, the amount of space needed is an important factor to consider. Garmin recommends placing the unit between 6.5-8' behind your ball. When using indoors, you will need at least 8' of ball flight. So all in all, you'll need a minimum of 14.5' of depth to use the Approach R10 indoors.

It might be important to note that the R10 still requires 6.5' of space behind the ball and at least 8' of ball flight even when outdoors. Overall, the Garmin Approach R10 is one of the best value launch monitors on the market.

Its biggest pros are its price, club and ball data offering, and it's golf simulation capabilities. It provides more shot data than any launch monitor in its price range - and the offering of golf simulation is the true wow factor of this unit.

Its biggest cons are that it's not going to be as accurate as more expensive systems and its graphics. The poor graphics are somewhat surprising given that we are living in an age where gaming graphics are at an all-time high for realism. But I can certainly live with the subpar graphics if it means I'll save a significant amount of money.

As far as the accuracy goes, the R10 is more than reliable for the majority of golfers. We're talking about seeing 3200RPMs of spin vs 3800RPMs. Or a 2 degree pull vs 3. So if you are a near-scratch golfer or know your shot data metrics to a T, then you might appreciate the bump up in accuracy of units like SkyTrak. But for everyone else, the R10 will be more than helpful!